I put the current chest together the other day, fitting the till and the floor boards. I will leave the last board out until after Christmas to allow the others to season a little, then drive it in to tighten them all up. I can't really do it yet anyway. Richard Bent is making me some rosehead nails, but they won't be ready until the New Year. 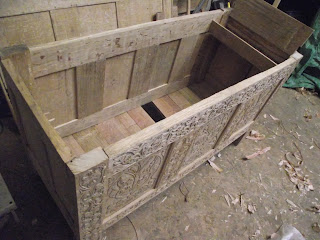 After this I started prepping the rails and stiles for the panelled top. I opened up this log which I had been saving for the lid panels, but disaster struck, the log was twisted and unusable inside. 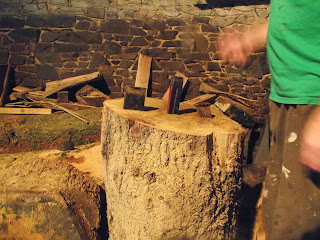 A typical case of not counting your panels before they are hutched. Not the first this week as I found out the other day I had not been accepted to show at Bovey Tracey Craft Fair. If this is not Devon craft I don't know what is!

Anyway, onwards. I need to clear some space and use up the more twisted oak, so I can get some more suitable stuff for riving in. 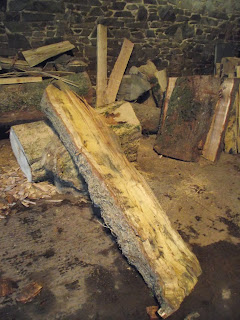 I am meandering from hand tools on this job, its not like I'm out to make a seventeenth century pole lathe. I must confess to never having turned anything in my life before, but I will need to turn the front legs on the settle I am going to join next.

A nice piece of holly for the bed. 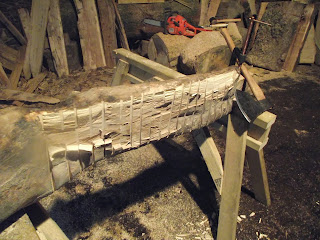 Some riven oak billets for the legs. 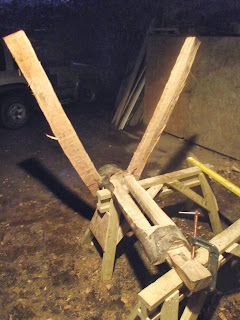 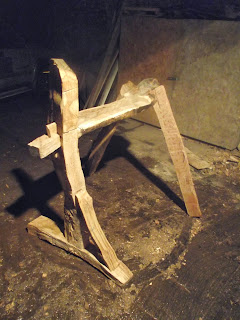 I have based this on a pole lathe made by Sean Hellman. I bow to his greater experience in turning matters. The joints are rude but appear to function well enough. I don't want to spend weeks fashioning a perfect lathe. I am very much into the functionality of tools and not so bothered what they look like. I prefer to put the effort into what I am making with them.

My modern electric drill succmbed to its inbuilt obsolence yesterday and I didn't fancy a hand auger or brace to go through the six inches of not very green holly, so it was out with this beauty. Presumably a 1950's beast that was made before some fool thought of IO. It reminds me of black and white Flash Gordon rocket ships. 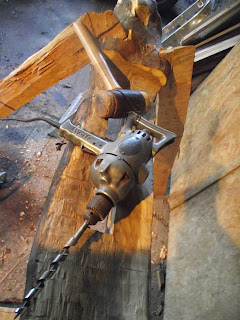 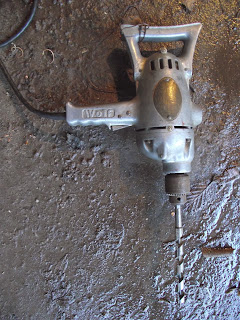 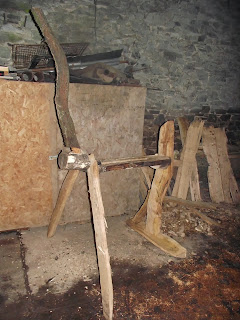 Next for a length of hawthorn for the swing arm pivot. I was aiming for a reindeer but ended up with this strange beast. A treadle, a swing arm and some centres to add but that's another story.

Best wishes to all for the festive season.